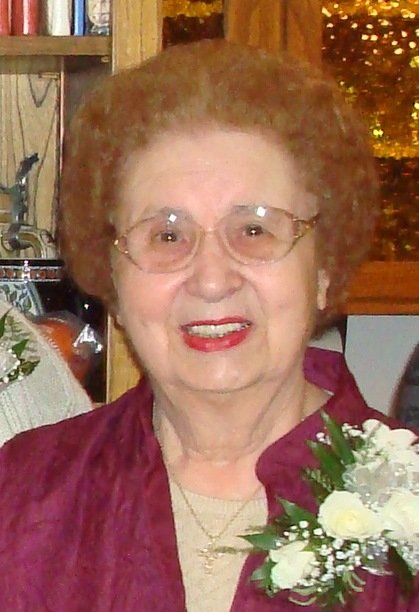 Rose Mauro peacefully passed away in Hollister on January 5, 2018 at the age of 97.

Born in Figline Vigliaturo, Italy, she immigrated to America in 1934 with her brother, Mauro Naccarato and her mother Agatha Caputo Naccarato.  Her father Giuseppe Naccarato worked on the W. I. Hawkins Ranch and they provided a home for them  She attended Ausaymus School and learned to speak English, graduated, and then attended Hollister High.  She met Ed Mauro and they were married on Christmas Day, 1941.   She worked in the family grocery store, Mauro’s Market and in 1958 they purchased Crowe’s Stationery Store, changed the name to Mauro Stationers and eventually had locations in Hollister, Gilroy and Morgan Hill.

On Christmas Day, Rose and Ed celebrated their 76th Wedding Anniversary with their family at their son’s home.

In addition to her husband Ed, she is survived by her sons Anthony (Carol) and Edward (Barbara), 3 granddaughters Karen Mauro of Connecticut, Joan (Martin King) of Hollister, and Stephanie Mauro of Temecula, CA as well as one great granddaughter Camryn Irao of Hollister.  She is also survived by her loving brother Mauro Naccarato (Mary) formerly of Salinas, and sister-in-laws Ida Horn and Ersilia Sicoli both of Hollister as well a numerous nieces, nephews and cousins.

Rose had been a member of Y.L.I., I.C.F. and loved traveling to the casinos and to other locations with Friends Forever.  Her passion was cooking and providing a loving home for her family and friends.

Services will be Friday, January 19, 2018 at 11:00 at Grunnagle’s Mortuary with Father Rudy officiating.  A Celebration of Life will follow at the Hollister Elks Lodge.  The family sincerely thanks the loving staff at Mabie’s for their tender care of Rose.   Donations are preferred to the Hazel Hawkins Hospital Foundation or to the Elks National Foundation.

Share Your Memory of
Rose
Upload Your Memory View All Memories
Be the first to upload a memory!