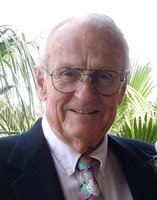 Dan passed away peacefully at home on June 20, 2020. He had been on Hospice care for three months due to severe coronary disease and Alheimer’s Disease. Dan was 87 years old. He is survived by his wife Pamela, daughter Carolyn and step-children Heidi and Brad. He is also survived by his loving “girlfriend” Razzle (the poodle). As a young man, Dan served in the US Navy. His first civilian job was a Campbell’s Soup Salesman in the West Los Angeles area. Next, Dan went to school and became a school teacher, he taught in the Torrance, California area for many years. He most enjoyed teaching his Metal Shop classes. During this time, Dan also became a private pilot. Alongside his beloved uncle and mentor Si, most of his free time was spent flying his prized airplane “BONANZA 3255V” (1947 Beechcraft Bonanza). In 1977 Dan and Pam were married on Catalina Island, California. They lived in Palos Verdes, California for several years before moving to their first horse farm, Oak Tree Station, in Coalinga, CA. Once on the farm, Dan retired from teaching and became the man of all trades: Electrician, Construction man, Handyman, groom, Stable Manager, Breeding Specialist, cook and Horse Transporter. Dan was especially fond of the baby horses and had a great way of gentling them. In 1989 Dan and Pam purchased an abandoned orchard in Hollister, California and developed it into the Villa Rosa we know today. Most of the buildings and infrastructure on the property were in some way built by Dan. In Hollister, Dan continued flying his plane and sometimes hanging out with his “airport cronies”. Dan and Pam also continued to enjoy “flying to breakfast” at small airports all over California. In the mid-1990s Bonanza 3255V was restored and painted bright red. The restoration was a total success and Dan even entered the plane in some airshows and won several awards. Dan also had a deep love of dogs. In his later years, the care of this precious dogs Razzle, Dazzle, Hana and Maxine became his main duty and joy. Always a devoted husband, Dan passed peacefully with his wife Pam and “girlfriend” Razzle by his side. The family will be hosting a private Celebration of Life.