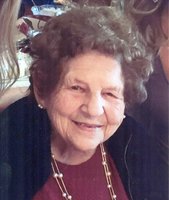 Lucille M. Freitas was born in San Jose, California. Her parents were immigrants from Italy, Dominic Tomaso and Carmella Caporicci Tomaso. Lucille moved to Watsonville at a very young age and attended Notre Dame Catholic High School and Watsonville High School. Lucille worked at the Pajaro Valley Bank before she got married.

On June 8, 1947, Lucille married the love of her life, Clarence J. Freitas. They lived on the ranch in San Juan Valley. Lucille and Clarence were partners with L & C Freitas Farms. Lucille was a housewife and bookkeeper for the business.

Lucille enjoyed playing Bingo at the San Juan Community Center. She was a member of the A.S.T. Sorority in Watsonville for seventy years, ICF Branch #26 in Hollister and YLI #240 from Seaside.

Lucille loved all of her family and friends. She was a big letter writer back in the day. She had a strong Catholic faith and prayed the Rosary daily.

Entombment will follow at Calvary Cemetery, 1100 Hillcrest Road in Hollister to be followed by a reception at Paine's Restaurant, 421 East Street, Hollister at 1:00 p.m.