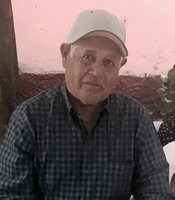 Lorenzo was born in Ameca, Jalisco. He moved to the U.S.A. at a younger age for a better living. He had lived in Morgan Hill since 1973, worked for George Chiala Farms inc. Since 1973 he enjoyed working in the agriculture and meeting new people along the way of years. Lorenzo and Maria got married in 1982 in Mexico and welcomed there first child in 1983 and immigrated to the U.S also and family grew to three. Through out the years they worked very hard to accomplished the American dream and provide to there children the best. They became home owners in San Martin. Lorenzo enjoyed spending time with family specially all five grandchildren, he also enjoyed visiting Mexico (Queixpan) his home town never forgot his roots where he came from. He was a kind loving being he was willing to help in anyway he could. He is survived by his wife Maria E Castillo, two daughters and son Mireya, Chayo, Jr, and five grandchildren Lalito, Alex, Jaela, Karely, Jocelyn (Jocey). He will be greatly missed.