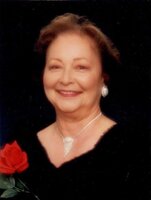 Rose Marie Zgragen was born on January 28, 1926 and went to be with the Lord on May 31, 2022 at 96 years young at heart. Rose was born and raised in Hollister where she resided all her life. She was the daughter of Antone Gomes Silva and Rosie Maria Pacheco, who raised her to be proud of her Portuguese heritage. She represented the S.D.E.S. as Festa Queen in 1942. She attended local schools, graduating from San Benito High School in 1943. She married Frank Zgragen on June 11, 1944 and they had five children. Rose started her working career in the family-owned business of Baywood Farm Dairy. She continued working as a bookkeeper and in a variety of positions for many local retail businesses. She enjoyed helping people at Sugar Plum Farm Restaurant, Ford’s Department Store, Hollister Pharmacy, Hollister Florist, and eventually owned her own business called The Rose Garden Boutique. Rose was a fiercely independent woman who loved spending time on outdoor projects at her ranch, driving her tractor, and raising chickens and cattle. She was especially proud of the many varieties of roses on her property which her dad had planted. Her family looked forward to picking the blackberries she grew in her garden every summer for nearly 40 years. She also enjoyed ceramics, knitting, arts & crafts, bowling, and traveling. Her grandchildren fondly remember spending weekends at her house watching her favorite tv shows, painting ceramics, and eating her homemade spaghetti. Rose is survived by her sister Clare Devencenzi, brother Tony Silva (Dianne), and sister-in-law Irene Silva; sons Frank Zgragen, Mike Zgragen (Sue), and Rick Zgragen (Susie), daughters Nancy Edwards and Cindy Tyler (Mikel Martin); 12 grandchildren and 17 great-grandchildren. She was preceded in death by her former husband Frank Zgragen; brother Alfred Silva; sisters Mary Jane Walker and Helen Barnes; daughter-in-law Lou Zgragen. She lived a very full life and has touched the hearts of many people along the way. She was a wonderful mother, grandmother, and great-grandmother who will always be remembered for her sharp mind, witty sense of humor, and strong will. Special thanks to Dr. Chirala & Dr. Coelho for the care she received for many years. Private services will be held. Donations are preferred to St. Jude’s Children’s Hospital which she had donated to for many years.