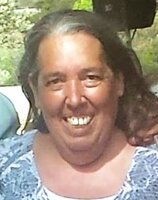 Longtime Hollister resident Jeannette Brookshire, age 58 passed away suddenly on April 1, 2022, at her Lexington, VA home. Jeannette was born on April 30, 1963, to Marco and Barbara Brookshire in Hollister, CA. She graduated from San Benito High School in 1981. Jeannette worked for several years for The Hollister Freelance and most recently for Home Depot in Virginia. Jeannette has two daughters, Misty Jackson and Jamie Glenn. Jeannette enjoyed spending time with her grandchildren and traveling with them. In addition to her parents and daughters, Jeannette is survived by her sisters, Theresa Rabaut, Kathy Brookshire, her grandchildren Nicholas Jackson, Courtney Cattoor, Samantha Cattoor, Ashlynn Cattoor, Kayla Glenn, Andrew Glenn, nephews Chuck Rabaut, Daniel Rabaut, numerous Aunts, Uncles and Cousins. Jeannette was preceded in death by her brother, Steven Brookshire. Graveside services will be held at the IOOF Cemetery in Hollister, CA on June 4, 2022, at 11:30am. In lieu of flowers, the family requests donations to be made to a charity of your choice.