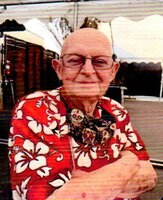 Albert John Parks Jr. arrived on the other shore on December 28, 2021 after a brief stay at Hazel Hawkins Hospital in Hollister, CA. He is survived by his loving sister, brother, children, nieces, nephews, grandchildren, great-grandchildren and great-great grandchildren. Albert was born on Sally Street in Hollister, CA in 1930. Throughout his life, it was clear that his greatest passion was going fast. AJ was an avid motorcyclist. He participated in motorcycle races throughout California until he retired from racing at 55 years of age in 1986. He had an illustrious career at the powerplant in Moss Landing, CA and recreated himself as a farmer in Battle Mountain, NV until his retirement from that life in 2009 when his dear wife, Florence passed away. AJ was charismatic patriarch who made an immeasurable impact on his family and the scores of people who were luck enough to consider him a friend. AJ lived a long happy life on his own terms. He had an unquenchable thirst for knowledge, up to his final days, as was made apparent with the arrival of a new pocket dictionary, just the day before he passed. AJ was always game for an adventure, having traveled extensively, including a trip this year to Las Vegas, NV to attend one of his great-granddaughter’s wedding. He grew up fast, liked to go fast, and spent his post-retirement chasing fast women.