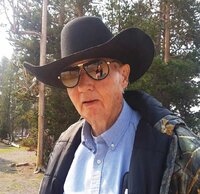 Robert Dean Vaughn, beloved Son, Brother, Uncle, and Friend, went home to Heaven, on September 7, 2021 at the age of 78. He passed away peacefully at the Palo Alto VA Hospital, after a short illness. Robert Dean Vaughn was born on November 25, 1942 in Vancouver Washington to Merle Ora Sr. And Betty Ruth Vaughn. Robert was the second out of four boys, Merle Allen (Jr), James Charles, and Steven Ray Vaughn. The Vaughn family lived most of their life in the pacific north west. Living in Washington state and Oregon, until they finally came to California in 1949. In 1956, when Robert was 14, the family moved up north to the Salinas Valley. Robert attended Salinas High School and North Salinas High school, and graduated from North Salinas High school June of 1961. He immediately enlisted into the United States Air Force and served his country for 4 years as an aircraft engine mechanic for the KC97 tanker. He later attended Heald Business College in San Jose where he received an Associates of Applied Science degree in Electronic Technology. He worked as a field technician for the US Geological Survey and as a quality manager for several different companies such as RayTek, Bucci Sunglasses and Foveon. Robert moved to San Benito County in the late 80’s, retiring in 2001. In his retirement Robert enjoyed writing. He especially enjoyed Science fiction and he published 4 of his Sci Fi novels. Robert was preceded in death by his parents, Merle Ora Sr and Betty Ruth Vaughn and his Niece Stacie Renee Collins. He is Survived by his three brothers, Merle Allen Jr, James Charles and Steven Ray (Fe) Vaughn. He is also survived by many nieces and nephews: Denise Van Loon (Mike), Jenny Vaughn, Mary Roascio (Ryan) Corrine Zorra (Steve), Joeann Vaughn, Mike Vaughn (Meghan), Monte Vaughn, and Joseph Vaughn. And many more Great nieces and nephews in Montana, Colorado, and California. The Family will be holding a private service for Robert in October. Donations can be made to your local Veteran charities on his behalf.