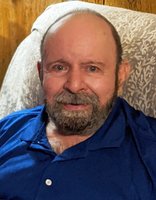 John Anthony Lopes passed away at 81 years young on July 1st, 2021. John was born at old Wheeler Hospital in Gilroy, December 27, 1939. He was a lifetime resident of Hollister and graduated from San Benito High School in 1957. He was a lover of cars and anything mechanical. He made any stranger feel like a neighbor. He could start a conversation anywhere with anyone at anytime. He was married to Bernice Martin from 1958 until her passing in 1988. John is survived by his wife, Linda, of 32 years. He is also survived by his brother, Phillip, and his two daughters, Patricia and Jonice Lopes; his seven stepsons John, Philip, Robert, Leonard, Edward, Steven, and David; 23 grandchildren and 21 great-grandchildren. He was preceded in death by his mother and father, John B. and Marie Lopes. A Celebration of Life will be held on Sunday, July 18th at 2:00 p.m. at Grunnagle-Ament-Nelson Funeral Home.