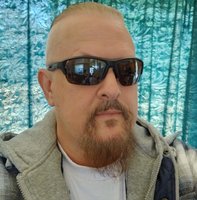 Rockwell David Gabon entered into rest at his home in Hollister on June 12, 2021. Rockwell David Gabon was born in Santa Clara on January 11, 1963 to Mary Laverne Fey and Rockwell Ivan Gaban. He was their only son. Dave attended Santa Teresa Elementary School, Bernal Middle School and Santa Teresa High School. Upon graduation high school, Dave worked many jobs; too many to name. At 21, Dave entered into law enforcement and became a reserve officer for San Jose Police Department. He also worked the Transit Division and the Santa Clara County jails. At 25, he joined the CHP where he remained until he retired in 2013. Throughout his life and career Dave made many friends. Dave was also well known in the “bug world” as he called it. He was really into scorpions, spiders and ants; he would spend hours on Facebook answering questions for people in the “bug world” as he was very knowledgeable. Dave enjoyed hiking, (bug hunting) and fishing. Later, Dave got into wood working and restoration of old civil war era rifles. He enjoyed bringing life back into these old beat-up rifles and making them look brand new. Dave was a kind man with a big heart and a great sense of humor. He could turn a bad day into a great day just by being him. Dave is survived by his wife Hildie Gaban; sons Erik Gaban and Alex Mitchell; mother Mary Fey and step father Maurice Fey; brothers-in-law Frank, Patrick and David; sisters-in-law Shirley, Christina, Lydia and Sheena; as well as many nieces and nephews. A Celebration of Life will be held at Grunnagle-Ament-Nelson Funeral Home on Saturday, July 10th, 2021 at 1:00 p.m. A reception will follow at Montebello Estates on Montebello Drive in Hollister.